Today I’ve been reading about McNurlin and Sprague’s “Waves of innovation” model (2009) for the changing role of IT within an organisation. It’s essentially made up of 6 waves that have been observed over time, it looks like McNurlin started with 5 and the 6th was added somewhere in 2009. 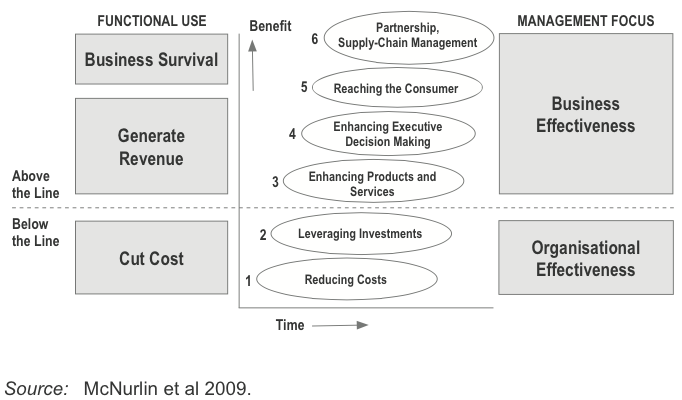 Wave 5 – Reaching the Consumer  – began in the ’90s with using IT to communicate directly with users, completely changing the rules of engagement

Wave 6 – Partnership Supply-Chain Management – looks at integration of partners into the supply chain.

The premise is that these are observed waves and that IT is appearing to loosing some of it’s traditional responsibilities. I think that this is because the view painted treats IT capability as a uniform blob and not as discrete functions and capabilities. It doesn’t take into account that you have a spectrum of bleeding edge capabilities through to commoditised offerings at the far end and the value that each capability or service delivers sits somewhere on the “value” spectrum too.

Delivering value with IT systems requires clear understanding of the business, the services and capabilities that make it up and how IT can then support those individual pieces. This one dimensional view of IT is what holds business back from making smart decisions.