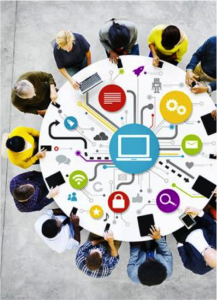 I had an interesting conversation the other evening with Markus Andrezak (@markusandrezak). It was using music co-creation and collaboration as an analogy of how to interact with your customers in the business world.

I like the analogy of music and music creation having once, in a previous life, been one (or a joke goes been the guy who hangs around with musicians). when you create music with fellow musicians it really is both collaboration and co-creation, everyone feeding off each other’s ideas essentially starting from one persons base concept. Extending that analogy into business you can look at a start-up where they originally set out to solve their own problems as the basis of the initial product being created. That same problem solving “thing” is discovered to work for others and a new business is formed.

As the start-up grows it starts listening to its initial customers for changes and enhancements, directly adding in features and capabilities. Again this works with the music analogy; the musicians listen directly to the friends and fans, those that attend the performances, and adjust accordingly; changing tempo, changing key, even playing in a different style. In both instances again this is Co-creation because it is a small group able to communicate their needs wants and expectations. As both the music analogy grows into wider distribution of the music, be it online or via physical distribution,separating musicians from direct interaction with their fans, as an organisation grows to include many more clients, it is very hard for almost impossible to maintain or even regain that level of initial intimacy and Co-creation.

What happens when you do reach such scale is that there is a lot of noise that need to be picked through.

There was a lot of debate as to what was collaboration and what was co-creation. Both are the process of working together for a common end. I’m hard pressed to really distinguish between the two and could easily argue that try differentiate is degenerating into an argument about semantics.

Trying to find other people’s views on this was interesting. over at this site I found a reference to this paper: A Typology of Customer Co-Creation in the Innovation Process, where they define co-creation as –

“Customer co-creation is an active, creative and social process, based on collaboration between producers (retailers) and users, that is initiated by the firm to generate value for customers” (Piller, Ihl & Vossen – 2010)

Where as over here  they assert that collaboration is co-creation.

Where I think the difference could be is, collaboration is a structured coming together to address a specific issue or problem and co-creation is a broader, ongoing engagement. Either way, I think the point is that it’s a good thing and should be embraced, unless of course you just meme copy and take your strategies from others

2 thoughts on “Collaboration vs. Co-creation”